It's been quiet here

It's been just too quiet here on this blog. Well I've been busy with life. But a lot has happened on the Larp scene.

There's been Avatar (where I only help in the build up a bit), I went to Conquest of Mythodea (which was awesome) and last weekend there was my Calam larp. 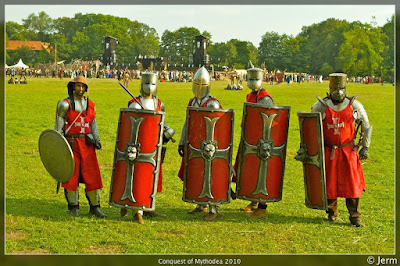 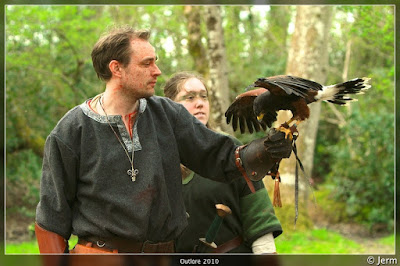 Above is also a link to photos I took at Outlore last May (yes, that's me with a hawk :-)).

I'll see that I'll post some reviews of each event, but in the mean time I hope you'll enjoy the pictures :-)
Posted by Jeremy at 12:11 No comments:

It's been a while that I talked about Calam and so I thought it good to inform all of you that we've opened the subscriptions. Go to www.calam.eu to subscribe for the next installment.

Once again the team is very enthousiastic about this event. The plot will thicken (duh) and we will make some nice new props that should dazzle the players :-).
Next we will also add extra background information for all faction as we've received the help from some players to help us out on that. This will all result into a Calam that will feel more alive.

If you're not yet certain about Calam you should also check out our forum and ask for info from our participants of Calam II. You won't be disappointed.

More posts will follow later :-)
Posted by Jeremy at 10:23 No comments:

It's been very quiet on this blog. So I thought to give a quick update on things to expect:
First review will hopefully be posted somewhere in the coming week
Posted by Jeremy at 13:35 No comments:

Evolving from enthousiast to pro

Most of us larp organisers started our hobby as enthousiast. We wanted others to experience the wonderfull world we created. But we all quickly learned it's not all fun.

In order to organise an event we often have a legal organisation backing the event, we need an insurance, bank account, accounting, IT and much more. Soon the hobby takes on the aspect of a small company (packaged inside a non-profit organisation).

With this organisation comes meetings and that's what I want to talk about today.

In the professional world I'm a freelance IT consultant working for a big international company. We have our share of meetings. And like those meetings in the larp world they mostly start late, have no agenda, have discussions in between, end late and lastly no summary of the meeting is sent around.

But since a year now I've introduced the Manager Tools effective meeting guidelines in my professional meetings. And the result is remarkable. My meetings start on time, have an agenda, stick to the agenda and the time for each agenda bullet, the meetings end on time (sometimes the meetings end earlier) and in the end I sent a summary of what was discussed and agreed.

So having made my meetings in my day job more effective I'm now trying to do the same for my larp meetings. A month ago I tried it out at a board meeting of Arrowhead Events vzw and it works :-)
We started 5 mins later than expected, but in the end we ended the meeting 5 mins later than expected. This means that we actually stuck to the meeting schedule and we didn't loose hours on needless talk.

Yesterday I was attending a meeting of the Belgian Larp Fedartion, BE Larp vzw. And it was what I expected it to be: starting rather late (30mins later then announced), no clear agenda (just a document was sent about what we would discuss), people talking amongst themselves, talking about one topic for more than an hour, etc.
Now, don't misunderstand me, what was discussed was important and people made some good points. But I had set aside 3 hours for that meeting and in the end those 3 hours were not enough. When I left after 3 hours only one third of the document was discussed. Meaning I missed 2/3 of the discussion.

I really think that if we would introduce the same standards we use in our professional life into our larp organisations it will really be a great help. I truly believe that the meeting of yesterday could've been done in 3 hours max.
It would already be a great boost if all attendees would start behaving professionally in those meeting. Now a lot of people were talking amongst themselves when someone was trying to make a point, showing a lot of disrepect to the speaker. Having the meeting start on time shows also a lot of respect to those people who actually made the effort to be there on time (btw: I was late, so shame on me).

If meetings always start late and run late you have the following result:
I've received the proof that using the Manager Tools guidelines for effective meetings work. They work in the professional world and they work in the larp world. It all take some practice. And a little bit of courage to start those first 'effective' meetings on time, even when one 1/3 of the attendee are already present.

I'd say, check out the podcast and start using their rules into your larp meetings, you'll notice the difference.
Posted by Jeremy at 09:00 No comments:

Player organised IC get together

I was browsing the Dumnonni Chronicles forum when I saw a discussion about an IC Social get together.

Seems some people think that if players come IC together it might ruin the actual game itself.

Well I disagree. Nothing is more fun than players coming together IC to socialise IC. They may even make big plans, forge alliances, try to kill one another (without really killing someone as that should be reserved for during the actual game), ...

For Manticore we've always allowed that (we even encourage it) and most players even invite us (the crew) to attend. When we have time we gladly accept the invitation and create an NPC character for ourselves.
For players it's always nice when crew attends since we can then give them some extra background information, mostly concerning their own group. We do try to make everybody equal be making that info either group specific or publishing the given info in the IC newspaper.

One of the fears that some crew have is that people would undertake actions that might break the game. But I don't understand this fear. Players can always secretely come together (IC or OOC). At least when the crew knows about the get togethers they can invite themselves :-) and check that everything goes well.

Most notoriously of all player IC get togethers I participated in must be the annual Rafiki's Birthday party each August. In 2008 there was even a murder attempt on Rafiki, without actually killing him. Result: the players who attended it were even more anxious for the next Manticore event.

I believe that the crew should be thankfull that players want to organise IC get togethers. It proves that you have players who really enjoy your fictional world and want to spend time in that world. What better praise can there be? :-)
It also means your players want to prepare themselves for the next game, meaning better IC-ness on their part.

This makes me remember Dragonbane, the day before the game started we were already IC-ish, which helped us get to know each other better in RL (we only knew most of the other players from the internet). Get to know the IC names of everybody etc. All in all the end result is in most cases better IC moments and immersion.

The only caveat of IC get togethers and crew attending is that the crew might give those attending the get together some advantage. Here I mean that the crew can give some background info that is specific to some plot of the (next) event. Crew should take caution to make sure that (a) the info they give is solely intended for the given playergroup or (b) that the info will be distributed via an IC newspaper or such.
As it would else be unfair to those players who are unable to attend/organise IC get togethers.

Well 2009 is forever gone and will only be kept alive in our memories.
For me 2009 had some ups and downs on the larp scene.
Main downturn was of course the fact that I resigned as a volunteer of Oneiros. I didn't like having to take that decission, but in the end I believe it was needed.
The biggest upturn was for me Calam II. After the mixed result of Calam I some people told me that Calam was lost beyond recovery. Since I'm hard-headed I went along and organised Calam II (with a whole new crew). Although there were not a much participants as at Calam I it still was a big success. Now I just have to confirm this success with Calam III.
Between my big up and down were other things of course; 2 mini Manticores, Avatar, Saga and of course the excellent Outlore.
For me Outlore gives me the closest opportunity to experience how Calam might feel to our participants. Both Outlore and Calam have self-cooking, high costume standards, quick and easy game system, etc. The story is of course different and the game areas are somewhat different, but in spirit they feel the same. Only pity is that I need to go all the way to the South-West of the UK for Outlore.
All in all 2009 was a good year for me on the larp scene.
For 2010 I have the following on my plate: Manticore (ending the current cycle), Calam III (needs to at least be as good as Calam II), trip to Sweden to check out Cinderhill for a possible Dragonbane II, Conquest of Mythodea, Saga and Dawn.
You'll notice that Avatar is missing from the list, well I'm not sure if I'll attend it this year. While I do understand why people like it, it's just not my thing.